It takes tremendous courage to jump into any ring, let alone a cage to fight.

It won’t be for you if you get claustrophobic or prefer to run rather than fight.

But that’s what Connor McGregor has done time and time again during his highly successful MMA career.

Super fitness, discipline and sacrifice are just some of the things Connor has embraced on his climb to becoming a very wealthy man.

A charismatic, loud and flamboyant character are the hallmarks of this warrior and in anybody’s book he’s a force to be reckoned with.

Along the way (and through much blood and shattered bones) he’s become very rich. 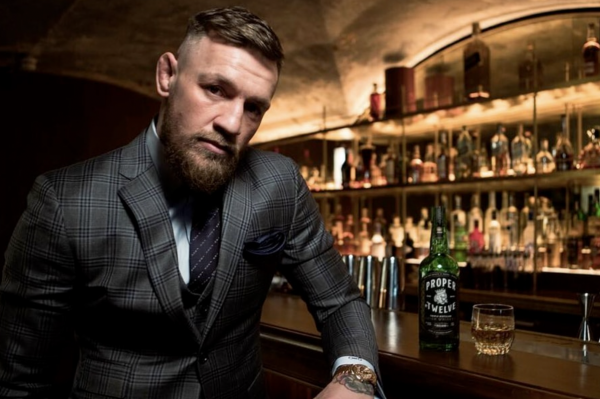 What is Conor McGregor’s net worth?

And these are estimates.

As with many very wealthy individuals it’s hard to know exactly how much wealth has actually been generated.

It’s not like all Connor’s business dealings are transperently shown on accounts that are easy to trawl over.

Wealth advisors, tax consultants, and an army of lawyers make sure affairs are kept tight and far from prying eyes.

As such any speculation of Connor’ wealth is just that – speculation.

The media likes to look at toys and assets celebrities boast about and usually base their computations on this.

What more can they do unless there’s a divorce, settlement or other types of litigation that may (or may not) hit the headlines? 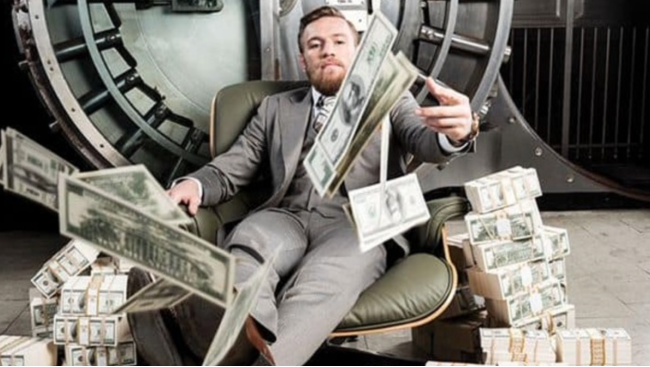 How he made it!

As of 2021, Conor McGregor’s net worth is a lot, making him one of the richest sportsmen in the world.

McGregor is one of only three fighters in UFC history to have won titles in more than one weight class.

In order to get an idea of how Connor has accumulated his money from fighting take a look below:

Not bad considering Connor lost the fight. But keep in mind he did suffer a leg injury.

In his fight with Khabib Nurmagomedov he bagged:

Then there were the fights with Eddie Alvarez, Donal Cerrone and of course Nate Diaz – all raising significant sums for Connor’s coffers.

And this is just a little part of earnings from fighting and excludes sponsorship and his highly lucrative Whisky deal!

Of course there’s not much point in taking all the pain and then hoarding the gains!

And Connor McGregor doesn’t have the personality to conceal his spoils.

Connor has recently purchased a 24-tonne, 19-metre long Lamborghini Tecnomar 63 (also known as the ‘Supercar of the Seas’) and is a toy well suited to this flamboyant showman.

In May 2021, he was named by Forbes as the richest athlete in the world outdoing the likes of Chritiano Ronaldo, LeBron James and Lionel Messi. 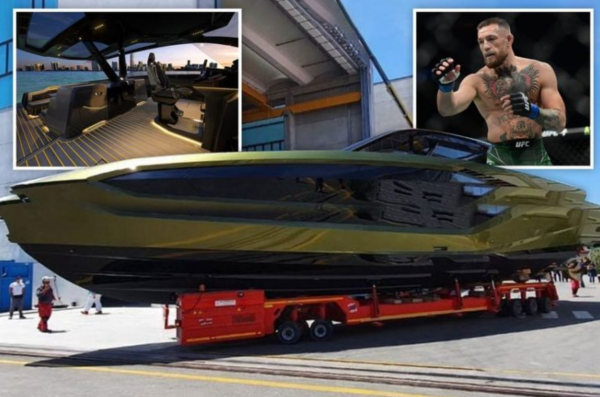 In 2019 McGregor splashed out £2 Million on The Paddocks near Straffan, Co Kildare.

There’s a spiral staircase that leads upstairs and and there’s an overall stately feel about the place.

A customised gym enables Connor to keep in tip top condition and ready for his next fight.

As well as a lovely home in Dublin McGregor also splashed out 1.3Million for a house in Marbella, Spain.

The Spanish home is found in The Heights, a luxury development that boasts wonderful views of the Mediterranean.

The villa looks spectacular from the outside with an LED lit driveway and an awesome and eye catching water feature.

Of course the home has a customised gym, a home spa and large outdoor swimming pool. 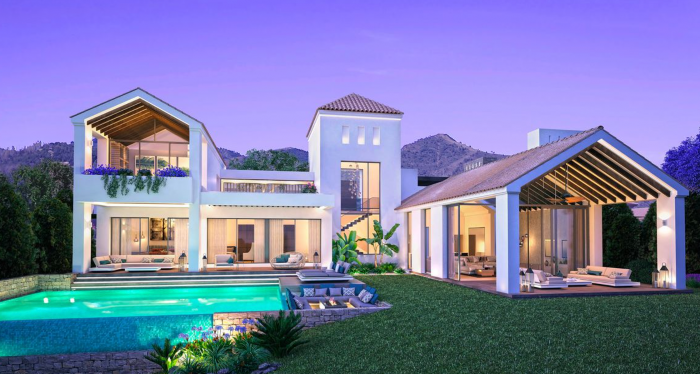 Starting out as a plumber’s mate with 5am starts wasn’t for this warrior. He made the decision early on to focus his energy and time on becoming a champion.

His wife Dee Devlin has fully supported Connor throughout his career and this went as far as financial support when Connor was starting out when he gave up plumbing.

They make a strong couple and have a lovely family.

An early trainer John Kavanagh, recalls his memory of  McGregor as, “a game kind of boxer. He was very game. He loved to fight. But he was also very strong – he could seriously bang.”

Both have been driving forces in Connor’s grand rise to the top.

Connor has his mind set on becoming a billionaire. His recent business dealings with Proper 12, the Whisky show he has a good nose for business. Expect more high profile deals.

Connor is strong willed and loves to talk. He’s charismatic and valuable in so many media related ways. This too could be a lucrative route for the bruiser.